After a fairly long relationship with a small dick packing guy, I realized it had to end. I had known for quite awhile his penis wouldn’t be enough. The problem was, I didn’t know how to go about it without crushing him.

I believed the hype and they all lied

It should have happened long beforehand but next thing I know he had proposed to me and feeling on the spot – I said yes. Dumb move I know especially already realizing that I needed big cock to be sexually satisfied.

You see I fell for the same trap that many women do and believe that size doesn’t matter. Well I am here to make it clear that YES in fact it does matter and a lot.

After all I almost married a short dick man and had to dump him due to this realization. It’s not like I was a size queen or anything, but after fucking a small penis I became one.

A shot at sympathy sex

At this point I knew I had to dump him so I thought maybe some sympathy sex or a pity fuck might smooth things over. In the least he could jerk off thinking about getting to fuck me before being dumped and having an engagement called off. It made perfect sense when I was drunk.

Feeling tipsy I figured I’d tease him and started doing stuff like bending over the bed, showing off my ass. Well he had been drinking too and he saw my ass wiggling around in my panties right before almost falling over trying to take his pants off. As if that wasn’t a sign of what was to come.

I tried so hard not to laugh but he came walking up behind me while shaking around or fluffing up his boner. Talk about pathetic! This tiny dick gets a chance at sex and his junk won’t work.

I even tried to help him. Reaching around back, I jiggled his small balls around and kept telling him to get it harder for me. Literally I kept saying, “Come on babe! Get it harder!” 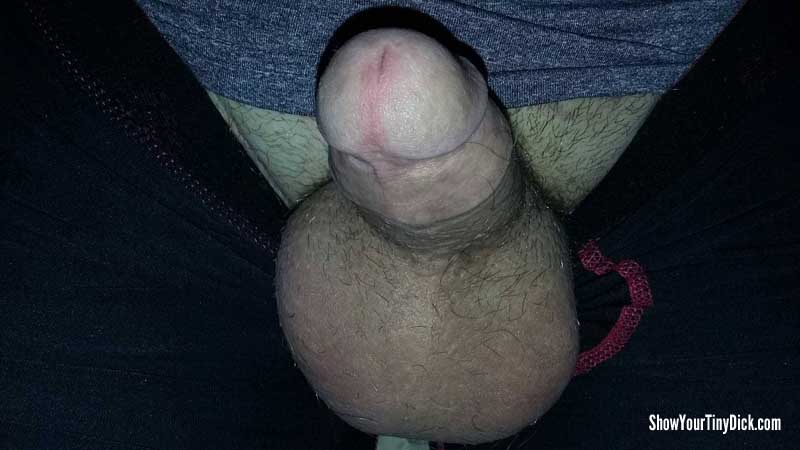 Apparently he thought if he did this cool move, where he spun me around and started trying to lick my pussy, that maybe I wouldn’t notice. Well I did.

So he’s licking away like crazy while flopping around his tiny wiener and finally gets hard enough to slide it in. Next came some pity sex right? Wrong!

Did somebody say premature ejaculation?

The shrimp dick attempted to slide it in my pussy but kept just pushing up against it. Before I knew it he was making all these pathetic yet hilarious noises, all moaning and groaning like he was a bitch. It was right then that he began premature ejaculating all over my leg before he passed out like a limp loser.

The lesson to be learned here is to never get involved with a guy if he has a small dick. It will only lead to trouble.

For my ex; hopefully he enjoyed his pathetic attempt at pity sex. That was the last chance he ever got because I ended up dumping him and giving the ring back shortly there after.